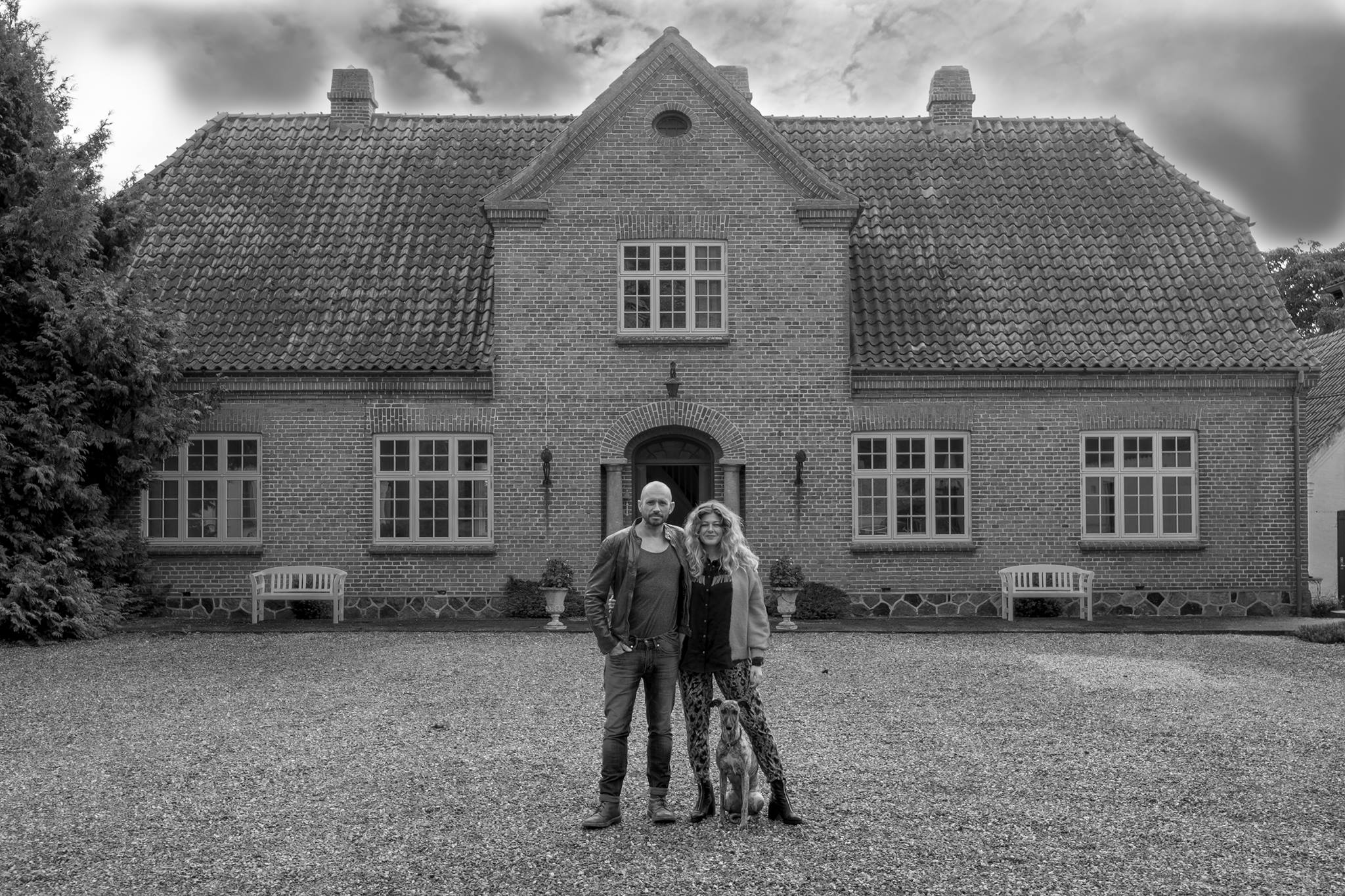 This past year has really turned the whole world upside down, not least the hotel industry. In this interview, we chat to Anna and Lars Norrman, who could never have imagined what to expect at the beginning of 2020. They sold their home in the autumn of 2017 outside Copenhagen and moved to the country where they opened their B&B, The Norrmans.

When you go to your website, you immediately feel how passionate you are about your B&B. Can I ask when and how you first entered the hotel industry?

Although we have no direct experience of working in the hotel industry before opening our own B&B we had both worked in the service industry all our lives so it has always been very close to our hearts. But we knew nothing about hotels other than that we had always enjoyed traveling ourselves.

I understand that you have a beautiful countryside B&B, and then expanded by taking on another project by the sea. How did that happen and do you have any tips that you can offer to anyone who is also considering growing their business?

Yes, we decided to expand and wanted to see if it was possible to run a smaller place with a profit. When we first started we met so many people who laughed at us, said that we will work ourselves to death, and that it would last a few years before we figured out that it wouldn’t turn a profit.

But when I sat down and did the math, I decided that those dire predictions weren’t really true. It’s just a matter of being able to charge the right amount and offering what the guests want. We set our prices more at hotel level whilst offering better service with all the trimmings but it is still a B&B. And it has worked very well so far!

So just before Covid-19 arrived, we bought another house and the idea was that we wanted different places that offer different things to attract another kind of clientele. This house is a house that I like very much; it is located in a small fishing village near the sea. It is an old and well preserved smithy with houses set around it, so we decided to maintain it as it was and basically just added color!
It’s a house that you rent to a party, so it is the same price no matter how many you are, and it is also a good complement as we are often fully booked in the summer, and it’s great to be able to offer it to those guests who want to book in larger numbers. And then they can book a table up in the restaurant to eat there if they like. All in all we think it was a good step to get a small house that we can rent out in addition to the main B&B.

Can I ask what some of the challenges are that you’ve faced due to the Covid-19 pandemic over the past year and how have you overcome them so far?

Oh man, it has been the craziest year of my life! We were in Denmark but had 99% Swedish bookings. In the beginning the borders were still open so there were a lot of cancellations and rebookings and we ended up having half-full weekends even though we were supposed to be fully booked. So when Covid-19 really exploded, we were almost fully booked all summer, the weekends were booked in autumn and the entire spring.

And then we had advance payments, which meant potential liquidity problems if all this money had to go back out. So to start with we thought it would be ok if we always worked two weeks ahead. But then suddenly they were closing the border and 100% of our bookings disappeared overnight! It was a really dark time for us. If it wasn’t for the fact that we had to refund so much money we might have felt that we were going to survive. But it was so black. We had made a small investment and built a large greenhouse on the farm for our new chef as well so there was no rainy day money to tide us over. And we had also bought this house just before everything fell apart and invested money there. It was awful. As a last resort we approached the guests and asked them if they would be willing to just postpone their bookings to save us refunding them. Many were reluctant to do so because they were absolutely sure that we would go bankrupt but those that did really helped us out.

We had tried to look forward to the autumn because at the time we thought that would bring back some normalcy to the industry. But with the whole spring and summer canceled, it was hard going. We had hired some help on the farm just prior to Covid and had thought we would need to lay them off but we were amazed when they said they wanted to stay. Basically they said ‘don’t worry about a salary, we will figure this out together’. So that’s exactly what we did! In a single one month we managed to turn our visitors from 100% Swedish guests to 100% Danish visitors. I had some work to do in terms of PR and was pretty proactive about it. I called journalists and said “we have a place no one knows about”, and they wanted to write about us which was exactly the kind of exposure we needed.

We read on your Instagram (@thenorrmans) that you have been prepared to make great personal sacrifices to save your company. Do you feel that this pandemic has helped you understand the importance of being prepared for the very worst?

Yes, absolutely. We mortgaged our car that had a leasing contract, it wasn’t even possible to sell the car because at that point everyone was feeling the pinch! We met with the banks and stalled our loan repayments, it was the only way for us to manage.
We kept the house because the bank agreed to move our loans forward, it would have been a loss for them too if we had had to sell. There was no money to pay anything for during that period, so we had to make these agreements to survive.

So yes our world has changed a lot, we really love our company and we would have sacrificed everything to save it. We made a plan that the newer business would go first and then our house would go, whatever was necessary to keep going.

What would you say are your main concerns for the future and how do you think the next 6-12 months will affect the hotel industry and your company?

It’s quite difficult to say, but since we have a vaccine on the way, I think we will slowly but surely return to normality.
I don’t imagine much will change before spring and we probably won’t have conferences, weddings, or events in the way we have done in the past. I also believe that those businesses in the countryside are much better off than those who are in the big cities.
Our summer house is already fully booked this summer, so it seems that despite everything, the desire for travel is still very much there. So those of us in this industry shouldn’t take anything for granted, but I think we should stay prepared for everything. It’s important that we are flexible and very ready to make changes for any difficulties that might lie ahead.

Many hotel owners are now adapting to find ways to survive or even expand in the crisis. Have you found any business opportunities in the midst of the difficulties?

Yes! Right now i’m in the middle of hiring another person for our team. One that will help us optimize our weekdays, and we are also working on a new collaboration with nearby venues. It’s not entirely finished but it is with a place where we can work a little more with weddings and conferences and festivities.

That kind of thing will come back and I believe it’s important to prepare ahead. It will probably start with smaller events, in the beginning, then expand gradually. I don’t feel the industry will pick up in the near future, but I think we will still want to gather in different ways, so we’re starting to think about how we can be there to fill that need when we’re on the other side.
We are trying to get two extra rooms approved and funded by the council because we want to expand the business. So we’re working hard to be creative with the little money we have.

What would you like to say to everyone who is going through the same difficulties as you did this spring/summer?

Don’t look too far ahead and try and approach your business with fresh eyes to see how you can adapt to the crisis.

I have had a lot of help and collaboration with the people around me just by picking up the phone, calling small hotels and asking them questions like, “how are you doing? How do you solve that problem? What do you think about this?” Don’t be afraid of doing that because I really believe that together we are stronger, and this may lead to further opportunities down the road.

Finding new ways to do business and adapting to the new government rules is hard as everything is in a constant state of flux. Right now we have a fully booked B&B despite the fact that restaurants are closed and the restaurant is a big reason why people travel. We have built tables into each room where the guest eats; it’s basically luxurious room service. If you had asked me a year ago, I would never have thought that we could sell our overnight packages at the same price if people were forced to eat in their rooms; I would have laughed a little at the idea. But you know, it works. We adapt and find our guests are also adapting to the time we’re living in. It’s about thinking outside the box, then going out and selling your business with confidence! My advice? Think creatively and act creatively and don’t be afraid of failure because the only failure is if we don’t try anything!